This “Care Bear” has done it all: photographer, journalist, title holder, burlesquer… and these days, he’s honing all his skills for the good of humankind. This weekend he’s enlisting some the scene’s greatest performers for his biggest charity event yet. Thotyssey gets On Point with the one and only Jed Ryan!

Thotyssey: Hi Jed! I know this is a busy time, how are you doing?

Putting these big benefit shows together isn’t easy, but it can still be fun! What’s the best and worst part about this process for you?

LOL! It’s definitely fun… but let’s just say it’s a very different kind of fun! We are excited to be bringing together a wide variety of talent from New York and beyond for a worthy cause.

The best thing is that I am a big fan of a lot of the performers who are gonna be there. And they are always committed to donating time and talent. We have had Tym Moss, Ike Avelli, Nelson Gonzalez, and Gary Hill in our lineup for previous benefit shows, and they always deliver the goods. This time we have some artists who I’ve never worked with before. I’ve never seen Coby Koehl perform before, but by everything I’ve heard and read about him, he is amazing. And Vivian Darling from Rochester is making her New York City debut. We have 11 artists altogether. That’s the best part.

The hardest part is the promoting. In NYC there are always, like, 100 events going in on any given night. That’s also one of the things I love about NYC, by the way… LOL! You have to really find new ways to spread the word about your events. It’s come a long way from going around handing out flyers!

True that! You’ve been in the biz here for awhile, are you a New York native?

Oh, yes! I have lived here my whole life. At the risk of giving away my real age (haha), I’ve been writing about and taking pictures of NYC nightlife since the early 1990’s. I’ve seen a lot of places come and go. So many memories. So many hangovers…

Where were you getting your work published?

For years, I had my own monthly column in a magazine called PM Entertainment. My article was called “What Jed Said,” and I would cover NYC queer events. They gave me wide latitude to write about whatever I wanted to. Every column I would write a little bit about bars, clubs, cabaret, and even movies.

Just to make sure that people actually read the article, I would make sure there was at least one photo of a celebrity, to catch their eye. Luckily in New York City you would always run into one– whether it was Delta Burke promoting her new Broadway show at Barracuda, or a Taboo-era Boy George flirting with the young guys and smoking cigs at B Bar even after the new smoking ban came into place. Once someone saw a picture of some kind of star, they might actually read the article. Luckily there was always a famous person who showed up just in time for the next article. “Oh, Amanda Lepore is here! Yay!”

I was a guest writer for many printed magazines through the years. Sadly, with the slow death of printed media, I am mostly an independent internet writer now. I’ve learned to like it better. You really reach a global audience… and I’m glad to know that some closeted kid somewhere across the world can get a taste of our “Circ Du So Gay” that is New York. 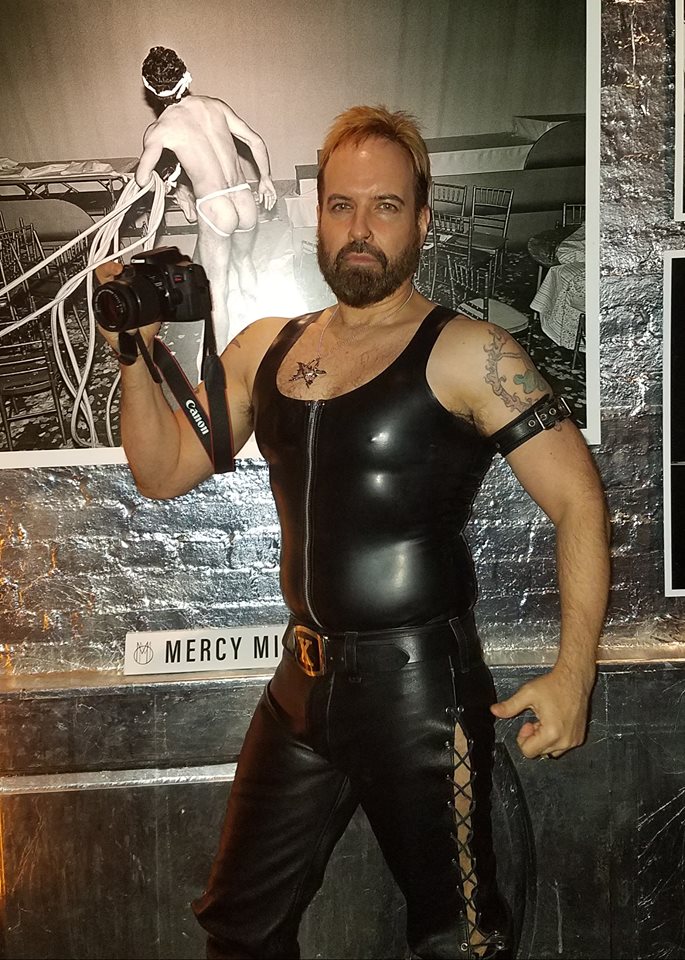 Amen to that! And you’re not just a nightlife scribe, you’re also an active participant. You have a presence in the bear scene, and you’re even a title holder: Mr North American Bear 2011! How did you first find yourself amongst the bears?

I have always believed that beauty comes in all shapes, sizes, and colors. What I find sexy may not be what another guy finds hot. I can appreciate beauty and sexiness in all men, regardless of “type.” But I’ve always loved guys who were bigger than me… or at least the same size and build as me. The term “masculinity” is always changing and expanding, but I’m gonna say that I love that “old school” man’s man look and attitude: facial hair, body hair, muscles… and most importantly, self-confidence and strength.

Years ago, I was guilty of trying to have that clichéd “gay” look: among other things, I used to shave my chest. Finally I was just like, “Fuck it! I am going to release the fleece!” I vowed never to shave my chest, balls, crotch, or armpits again. Today, I’m only disappointed that I am not as hairy as some of my other bear friends. Hairy backs, hairy asses, hairy chests, “welcome mats,” beards… Bring it on!

But it’s more than just the way a guy looks. I mean, come on now, Jim, wouldn’t you rather cuddle and snuggle up with a big, woofy guy in bed? I don’t want a guy who I have to worry about snapping in half during the throws of sexual ecstasy. LOL! Sorry, am I getting too raunchy?

Not at all, and you’re making some pretty good points here!

But seriously, Bears know how to have fun. I was the first guy to be named Mr. North American Bear, back in 2011. From the Yukon to the Yucatan, that’s the whole continent, bee-atches!


You’ve also dabbled in a bit of burlesque as well… like with Josh Schonewolf’s Bearlesque at The Deep End, not too long ago.

Yes! Josh lives in Philly, but he brings his rotating cast of Bearlesque guys to a lot of different venues in the Northeast and beyond. Burlesque has really exploded in New York City, and for good reason. It’s not just about showing skin. It’s also about pageantry, spectacle, and creativity–with some humor and shock value thrown in if you want. My acts aim to be funny as well as sexy. If I can make them laugh, that’s great. If I can turn them on, that’s great. If I can make them laugh and turn them on, then I blow my load.

Being in Josh’s show is how I discovered The Deep End, where Saturday’s event is gonna be. They are a relatively new place, but it has become one of my favorite hotspots. They have the monthly Bearlesque shows, but they have many other fun events like their naughty Bear Milk parties and lots of other crazy stuff. Jorge Mdahuar, aka DJ JEM, not only offered his space to us but actively wanted to be a part of this event because he believes in our cause for immigration equality.

You and fellow bear title holder Joe Mannetti form The Care Bears, and are spearheading various charity showcases throughout the city. You two just did a big show for Iris House a few months ago. How did this partnership come about?

Joe Mannetti I met back in 2011. He was already a multiple Bear Titleholder, and an award-winning fundraiser. We both care a lot about the LGBTQ community and about HIV/AIDS Awareness, so we teamed up as “The Care Bears.” We look for grassroots charities that haven’t fallen prey to corporate greed or financial mismanagement!  This will be our fifth event together since then.

We’re at a scary time now on our history, as far as the rights of immigrants are concerned.

Exactly! It is a scary time, in many ways.

Tell us how this Saturday’s showcase at The Deep End is gonna help the cause.

Immigration Equality has been doing their work since 1994, but now they have been busier than ever because the immigration situation has been a big issue lately. It’s hard enough being a stranger in a strange place, but then imagine being LGBTQ or HIV positive and being in that situation.

The artists [performing at the benefit] are graciously donating their time and talent, and we have gotten a wide variety of raffle prizes which were donated as well. We have artwork, tickets for shows, and even two VIP run passes for Key West Bear Weekend. Plus we have just announced that Bryce Eden Adonis and three of his Men Of Eden will be selling those raffle tickets. Trust me, you won’t be able to say no to these guys! Every dollar supports Immigration Equality.

Besides those mentioned earlier, who are some other performers we can expect to see?

Thank you for asking! In addition to Ike, Tym, Nelson, Gary, Coby, and Vivian, we also have the sweet ‘n’ sassy Viva Vidalia, the fabulously filthy Sucia Queen, the ultra-glam drag doyenne Zola Powell, the hilariously twisted Jeza Belle, and Mr. Fire Island Bear 2019 Eugene Guye. So, we have singers, comedians, drag artists, and burlesque with a lot of crossover going on! We also have the amazing NYC (dis)Order of Sisters, who are always willing to lend their philanthropic talents for a great cause. There’s truly something for everybody! 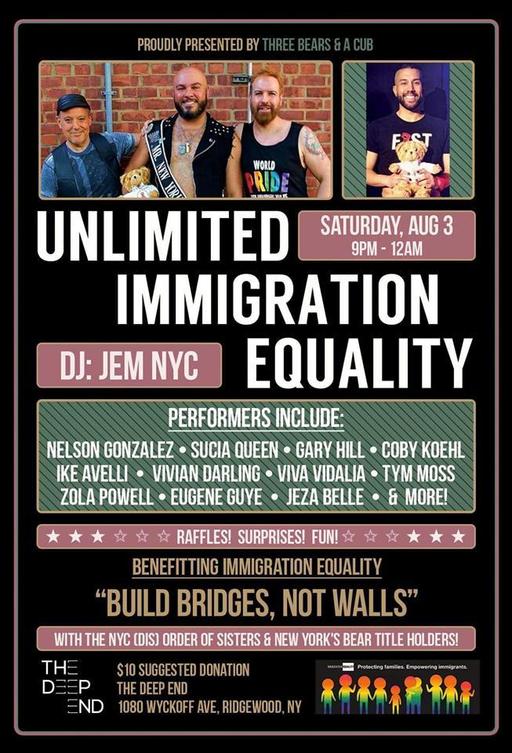 What’s coming up for you after this event?

After this event, I am going to be working on a photo exhibition called “The Morning After” (cue the Maureen McGovern song), which will feature side-by-side dual portraits of several celebrities of New York nightlife: drag queens, singers, burlesque performers, go-go boys, et cetera… but it will also spotlight the “unsung heroes” of nightlife like DJ’s, bar owners, bartenders, and writers like you and me, Jim! The goal is to show the dichotomy of Saturday night craziness alongside Sunday morning peace and tranquility, when your cuddling with your dog or trick from the night before… or lying on the couch in your pajamas watching reruns of Will and Grace. I hope to get that project running soon!

Sounds amazing, Jed! You’ve got a lot going on… I’ll leave you to it and see you Saturday!

Thank you for speaking with me, Jim. I am a big fan of Thotyssey! Thot Pride forever!